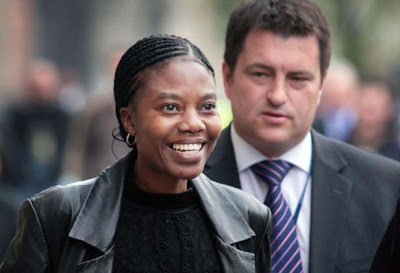 I am not a Christian, I have no faith of any sort. I do, however, admire the genuine, dignified faith and courage shown by some - but by no means all - who do. These are people to whom their faith is far more than just a vague mantra and some buzz words that they were taught as a child but has ceased to influence themin any significant, conscious way.

Magdeline Makola, who was bound and gagged and left to die in the boot of her car during the Scottish winter, surviving for nine days before she was rescued, is an example of such a person. Not just for surviving, but forgiving:

... on Boxing Day, it was only by chance that two police officers were walking through the car park at Drumgelloch railway station.

They heard what they thought was a woman's muffled voice coming from inside the boot of the Y-registration Astra. When they broke it open, they found Miss Makola in a state of profound distress.

Her wrists and ankles had been so tightly bound that they could only be released very slowly because of her pain. When officers offered her water, she screamed in agony because she was too cold to swallow.

Despite the removal of her blindfold, it took another 20 minutes before her eyesight returned.

Some 10 days after she had been first assaulted and at least nine days after being locked in her car, Miss Makola's prayers for freedom had been answered just in time.

Doctors subsequently found she was in renal failure and would not have survived another 48 hours in the car. Yesterday, the nurse, who is a British citizen, added to her extraordinary feat of survival with another remarkable act.

Minutes after sitting in Edinburgh's High Court to hear Ngema admit 14 charges of assault, theft and abduction, Miss Makola said she had forgiven her attacker and felt "no anger" towards him. In a statement read outside the court, she said: "When I was taken I did not think I was going to survive and the experience of being trapped is one that will stay with me for the rest of my life.

"While I was in the boot of the car, it was difficult for me to work out how long I had been there, but one of my strongest memories is realising that it was Christmas Day because it was so quiet outside.

"I have a strong faith in God and I spent a lot of time praying someone would find me. I am pleased Justice Ngema has pleaded guilty and I want people to know I feel no anger towards him, only pity. I wish him well in the future." (1)

Nowadays, this attitude is uncommon because we're actively encouraged to respond basely to baseness. People hurt us, we think we are entitled to hurt them. This is the sort of attitude that makes a grown man think he is justified to kill a child for tagging his fence (2). The Old Testament's "An eye for an eye" is more popular than Jesus's order than we forgive seven and seventy times. We want revenge, and we're encouraged to vent our rage whenever we can, in lack of self control, foul language, rudeness, aggression and violence.

This is the result of the culture of self-indulgence and snivelling individualism - it is all about us, we want everything, we want it on our terms and we want it now. The idea of a dignified and deeply held faith - one that actually affects how one acts and one's attitude - is so outlandish as to appear frightening.

Email ThisBlogThis!Share to TwitterShare to FacebookShare to Pinterest
Labels: Britain