This probably won't win me any friends, but here goes ...

WTF is John Key doing in the middle of an earthquake zone? It limits his effectiveness, puts him in danger and distracts resources. He should be in Wellington. I can't shake the nagging suspicion that Key needed to be choppered in to Christchurch because Phil Goff happened to be there as well.

What's happening in Christchurch is a disaster and a tragedy for those involved. But it doesn't need his immediate presence. As I/S points out, there's no effective difference between a local and a national emergency (1).

The buildings stood up pretty well when the first Earthquake struck, back in September. Since then, it's been continual aftershocks and a particularly brutal one today. I think the buildings did as much as could be expected of them. People just didn't take the hint and move after the September jig.

I'm baffled by the behaviour of tourists."Oh, here's a place that's just suffered a massive bastard of an earthquake and is still experiencing continual significant after shocks, lets go there. And while we're there, lets climb up the steeple half hanging of the half ruined cathedral, that's not at all stupid."

Of course, the tourists themselves are only acting predictably because they were told the cathedral was safe. Whoever allowed access to the tower can expect to be in for a pretty thin time.

Slightly more sympathy for the poor buggers who lived there, as the September quake was out of the blue (comparatively) and it's not like you can easily sell a house in an quake ravaged city in the middle of a recession.

From the pen of British PM David Cameron, writing in The Telegraph:

We will soon publish a White Paper setting out our approach to public service reform. It will put in place principles that will signal the decisive end of the old-fashioned, top-down, take-what-you're-given model of public services. And it is a vital part of our mission to dismantle Big Government and build the Big Society in its place.

We will create a new presumption – backed up by new rights for public service users and a new system of independent adjudication – that public services should be open to a range of providers competing to offer a better service. Of course there are some areas – such as national security or the judiciary – where this wouldn't make sense. But everywhere else should be open to diversity; open to everyone who gets and values the importance of our public service ethos. (1)

So, with lashings of phoney fearmongering about LAIRBORZzz DET MOwnTUN, bullshit about inefficient Stalinist 'top down' public service structures, and horrible Tony Blair speak about 'diversity' and 'choice,' David Cameron announces his intention of selling off virtually THE WHOLE PUBLIC SECTOR, based on the crazed idea that profit driven competitive markets are better at delivering universal health care, or education, or whatever.

Madness. As in James Donald as Major Clipton in The Bridge on the River Kwai gasping "Madness! Madness!" sort of madness.

Special prize for anyone who can find where this is mentioned in their 2010 manifesto (2).

1 - "How we will release the grip of state control," by David Cameron. Published in The Telegraph, 20th of February, 2011. (http://www.telegraph.co.uk/comment/8337239/How-we-will-release-the-grip-of-state-control.html)
2 - The Conservative Manifesto 2010, reproduced on the website of the Conservative Party. (http://www.conservatives.com/Policy/Manifesto.aspx)

So, Britain's Justice Minister, Ken Clarke, predicts (1) there will be problems for the coalition when cuts hit home?

Other than nabbing this week's prize for Stating The Bleedin' Obvious, lefthandpalm is moved to wonder why the justice secretary mouthing off about the economy?

Either he's warning the middle classes not to get all Egyptian because Ken Clarke is more Deng Xiaoping than Hosni Mubarak.

Or, is he hinting that the economic brain of the Conservative Party is not currently residing at 11 Downing Street.

It would appear that dissent, doubt, and holding of strange opinions are not British Values, according to david Cameron:

In an interview the Prime Minister – said by a Downing Street source to be "livid" about the attacks on his speech – stood by his philosophy. "You have to confront the extremism itself," he said."You have to say to the people in Birmingham Central Mosque, or wherever, who are saying 9/11 is a Jewish conspiracy, that that is not an acceptable attitude to have.

It would appear that entertaining strange theories is no longer permitted in Britain. While I shed few tears for the troofers, Holocaust deniers, creationists, climate change 'sceptics,' Dr Kelly doubters and the like, it suggests a worrying precedent. What else might be judged 'not an acceptable attitude to have.'

This prohibition on unBritish opinions also gibes with the right to free speech - which Cameron had endorsed as a fundamentally British value. It would appear you are free to say what you like, as long as it is the approved version.

One assumes he will also be taking measures against the endless stream of anti-semetic ravinga produced by the far right and the holocaust denial industry. Or is the 'British values' stick one specifically reserved for whacking Muslims with?
Little man, I told you to go away. Why are you still here?

So, David Cameron thinks multi-culturalism has failed and minorities should conform to core British values, does he? (1)

Maybe I'm just cynical, but I can't help wonder if Dave is banging the bigotry drum to distract from economic problems, his travails over Andy Coulson and the freakshow of his NHS 'reforms' coming undone.
It's a reflex for British politicians when they sense they are no beloved by the public. never mind what a shit I am, at least I'm a British shit! Not like them! Nasty foreigners. And before you can say Kristalnacht ...

It was contemptible when Gordon Brown started on about 'British jobs for British workers,' when Ed Balls tried to do it during the leadership election, and its f**k**g contemptible now.

What are 'British Values'? Ones which British people themselves uphold, I mean. I suspect that with any attempt to codify them, it would quickly become apparent that Brits themselves don't pay the slightest due to them, and would also be liable for whatever penalty the Minister For Cultural Correctness can impose.

Not that's I'd necessarily oppose sanctions on organisations that are sexist, racist, foment hatred or whatever - I just don't want the Prime Minister targeting minority groups, and I doubt a list of 'British values' could ever be drawn up that wasn't more than the vaguest waffle.

I mean, look at the examples he gives - "To be British is to believe in freedom of speech and religion, democracy and equal rights regardless of race, sex or sexuality". That's the sort of aspirational waffle-speak you'd find in the UN Declaration of Human Rights. I'm glad to see so many people have realised how strongly they support that noble document. I'm disgusted to see the Prime Minister hypocritically using it to target minorities.

1 - "Muslims must embrace our British values, David Cameron says," by James Kirkup. Published in the Telegraph, 5th of February, 2011. (http://www.telegraph.co.uk/news/newstopics/politics/david-cameron/8305346/Muslims-must-embrace-our-British-values-David-Cameron-says.html)

Lefthandpalm notes, with bitter amusement, the OUTRAGE about the termination of employment contracts of Canadian huskies (1). Or, as the Canadian media put it,

Lefthandpalm wonders if there such a thing as an un-loud uproar?

And lefthandpalm further ponders, what did people expect happens to animals when they aren't economically useful?

Those dogs were there for a reason - to drag tourists about during the Winter Olympics. Once the reason went, there wasn't any reason for the dogs either. They gave some naive tourists some pretty sled rides, then the tourists went away, did they think to wonder what would happen to the muttswhen there weren't any tourists?

Bottom line is, if we weren't so fuckingly stupidly intent on 'experience' and 'being there' and so on, these things wouldn't happen.

We treat animals like shit, all over. Getting upset about this or that particular example of cruelty just smacks of blinkered blinkeredness.

I've just had this little bit of research by the Pew Foundation brought to my attention (1).

I was particularly intruiged by this table, describing different responses received to questions about different specifically punishments mandated in Sharia law for different offenses: 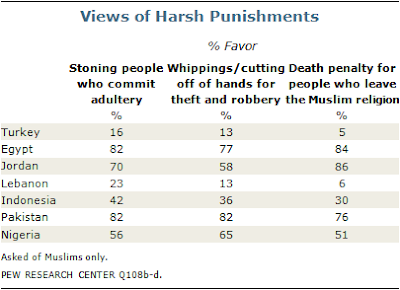 What's striking is the difference of opinion among Muslim populations in different countries for what would be considered appropriate, which rather scotches the suggestion of monolithic Islamic thought on those matters.

As for the depressing figures from Egypt, I'd suggest they might be a result of decades of authoritarian rule, which would tend to push opposition to extremes.

It's almost as if things like modernisation, democracy and multi-culturalism challenge dogmatic primitive tribalist attitudes, leading to the formulation of more flexible and tolerant attitudes. Who'd have thought it?

1 - "Muslim Publics Divided on Hamas and Hezbollah," study conducted by The Pew Foundation. Published on the Pew Foundation Website, 2nd of December, 2010. (http://pewglobal.org/2010/12/02/muslims-around-the-world-divided-on-hamas-and-hezbollah/)

According to the Independent (1), a foreign offic minister in the previous Labour government 'advised Libya how to free Lockerbie bomber.'

That's not me putting it in double quotes for fun, by the way - those words are placed in quotation marks by the Independent, which suggests it is a quotation from one source or another, but it that wording isn't used anywhere in the Indie story, the Telegraph original (2), or the wikileaks source memo (3), that I can see. Similar wording appears in the Telegraph headline: "Britain secretly advised Libya how to secure release of Lockerbie bomber," but the story attached to that headline doesn't bear it out - the Foreign office did not advise the Libyans how to secure Megrahi's release. They simply explained how his diagnosis altered the situation.

Slaps alround, to the Telegraph for running a misleading headline, and to the Indie for echoing it.

The only interesting points are the suggestion of Foreign Office involvement when the official stance was it was Scotland's call; but that's tenuous, as the foreign office would probably have the duty of notifying the Libyans - devolved Scotland does not have a minister of foreign affairs, after all. They would have contacted the Libyans on behalf of the Scottish executive, merely noting their own neutrality, as is indicated in the leaked memo:

The Libyan government is therefore pursuing Megrahi's early release through two other channels, the FCO reports: compassionate release under Scottish law, and the as-yet unsigned UK-Libya Prisoner Transfer Agreement (PTA). HMG has made clear to the Libyans, to Embassy London and to the media that it will take no official position on Megrahi's early release, but will leave the decision - whether through compassionate release or the PTA - to the devolved Scottish government.

It is much more interesting to be reminded - and kudos to the Telegraph for highlighting this - that Honest Dave Cameron is still sitting on the documents relating to the release, which is a bit odd as last year he was promising to release them to clear up any suspicion of a cover up:

It will also lead to renewed pressure from senior American politicians on David Cameron to release all internal documents detailing Britain’s role in the scandal. Last summer, the Prime Minister pledged to release the relevant information – but the publication has yet to occur sparking fears that a cover-up may have been ordered.

Er, nice going there, Dave. That doesn't look at all suspicious.

So any skullduggery probably originates with the companies trying to court Libya, who may have influenced the last government and - if so - would appear to be doing the same to the current administration.

1 - "UK 'advised Libya how to free Lockerbie bomber'," by Oliver Wright. Published in The Independent, 1st of February, 2011. (http://www.independent.co.uk/news/uk/politics/uk-advised-libya-how-to-free-lockerbie-bomber-2200349.html)
2 - "WikiLeaks: Britain secretly advised Libya how to secure release of Lockerbie bomber," by Christopher Hope and Robert Winnett. Published in The Telegraph, 31st of January, 2011. (http://www.telegraph.co.uk/news/worldnews/wikileaks/8294120/WikiLeaks-Britain-secretly-advised-Libya-how-to-secure-release-of-Lockerbie-bomber.html)
3 - "PAN AM 103 BOMBER HAS INCURABLE CANCER; LIBYANS SEEK HIS RELEASE," anonymous memo originating in the US embassy in London, dated 24th of October, 2008. Reproduced in The Telegraph, 31st of January, 2010. (http://www.telegraph.co.uk/news/wikileaks-files/libya-wikileaks/8294871/PAN-AM-103-BOMBER-HAS-INCURABLE-CANCER-LIBYANS-SEEK-HIS-RELEASE.html)