Martha & The Vandellas "Dancing in the Streets"

So, Theresa May is in a bit of trouble.  Tories are scheming and plotting - which they do on any day that ends in a 'Y' - and rumours are swirling that she is going to be 'persuaded' to 'do the right thing' for Boris Johnson's career the good of the country.  Now, I don't know about you, but I find it difficult to reconcile the terms 'Tory government' and 'the good of the country,' but I don't think what the mean is that all 316 MPs should take the Chiltern Hundreds.  It looks like there is a leadership spill coming over the ridge.  I'd better get me some popcorn.

For the plotters on all sides, there's a very complex calculation involved.

On the one hand, Boris is likely to bide his time and wait until Brexit is done. Too much like hard work for Boris. Also, he's sad things he might not be able to deliver on and he'd probably rather not have to do that. But those who don't want Boris sense a bit of an opportunity. Boris's stock is low at the moment - a lot of gaffes and disloyalty. He's part of the problem, not the solution. So if May goes quickly, yup, someone will have to Do Brexit, but it may be the only way to fend off Boris.

(Of course, that's pretty much what Theresa May thought and look where it has got her. Broken on the rocks and with the Great White Shark circling her.)

The crucial question for May is not whether Boris Johnson and Grant Shapps think she should quit.  Of course they do.  Goes without saying.  But if the sickness is spreading throughout the wider party and the donors, she's in real trouble.  From yesterday's guardian, a comment from Tory donor Charlie Mullins:


Charlie Mullins, the founder of London-based Pimlico Plumbers, said May must leave because she was being bullied and undermined by Johnson.

He said: “She has got to go for her own sake. It is getting embarrassing. If this was a boxing match, the fight would have been stopped. She has been put in a position where she is being bullied, she is being intimidated, they are making her life hell. These are Conservative people who are destroying this woman and it needs to stop.”

(Am I the only one struck by the profound oddness of the soultion - the victim has to go, rather than the bullies?)

So that must be worrying for her.  These people aren't likely to throw money at a party they regard as doomed.

Even if May survives in the short term - and I think she will, more due to the lack of spine in the Conservative party as a whole, rather than her own reserves of courage or obstinacy - she's in a pretty grim position.  The Tory papers are against her, and every misstep will be blown up as a fresh crisis which raises new questions about her leadership.  Believe me, on this topic if nothing else, we lefties know of what we speak. You think May is having a rough time of it? Look at Corbyn's leadership up until June 2017 ...

It's likely May's premiership will be remembered as a slightly surreal interlude between Cameron's blustering incompetence and ... well, whatever comes next.  It is unlikely she can expect historical rehabilitation as Gordon Brown can anticipate.  So all that's left is the halcyon days early on.  Cast your mind back to her first PMQs, and recall her imitation of Margaret Thatcher - "Remind him of anybody?"

Yes, Theresa, you DO remind us of Margaret Thatcher now.  The broken, post Poll Tax, post-Howe version, waiting for the unsmiling, bland little men in the background to tell her it was all up. Six months ago you were unassailable and riding towards a triumph; now you're just waiting to be put out of your misery.

"It's a funny old world," Thatcher said, after announcing her resignation to her Cabinet. I bet you agree.
at October 07, 2017 No comments:

It has been observed that Theresa May unaccountably took to the stage for her big speech to the Conservative conference wearing a bracelet featuring art work by Frida Kahlo, communist artist and (because women must always be defined by who they sleep with) occasional girlfriend of Leon Trotsky. 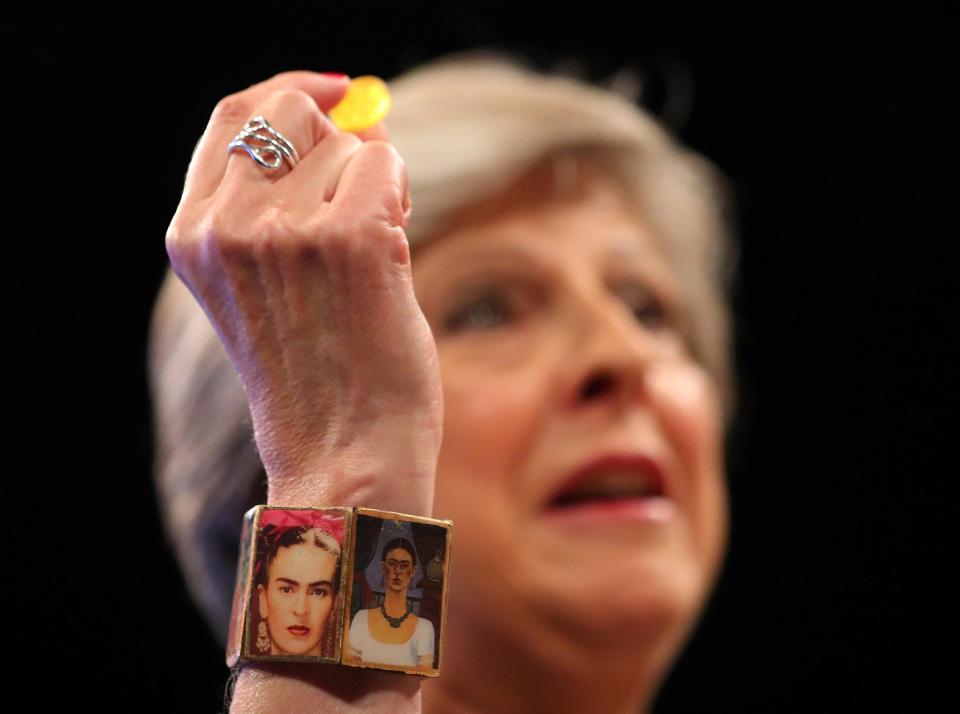 After being handed a P45 mid-speech by an audience member, a chronic coughing fit and then having the sign behind her fall to bits, it might seen a minor faux pas.

The Telegraph, heroically, tries to justify it:


After divorcing her husband Diego Rivera, Kahlo painted Self Portrait with Cropped Hair in 1940. The picture, showing her wearing a black suit and with a very short haircut, was widely interpreted to mean that Kahlo was sending a strong message to men: I am independent and I don't need you.

Might Mrs May have been willing the 'naughty boys' in her party to understand the very same?

I prefer a simpler explanation.

I imagine she wore it because she had little idea who the artist was and just thought it looked stylish and interesting. If she had a clue, I doubt she'd have been so silly as to wear it for the biggest speech of her life.