Just stumbled upon an article by the BBC's science correspondent, Richard Black, which mulls the continuing stream of letters from (usually the same) scientists claiming to see cracks in the 'consensus' around global warming. He cites a recent example spotted in the Wall Street Journal, and yup, some of our old friends - Messers Allegre, Lindzen and Shaviv are there, among others.

So much as usual. Black identified a localish name (for him) in the list and got in touch to quizz the 'denier' - a Mr Michael Kelly - about his motivation, which was moderately interesting. I'm not too interested in that, though, apart from one point, raised by Mr Kelly, which was this ...

"I look back 300 years and I find that the temperature went up by more than it's gone up recently - in Central England from about 1699 to 1729 it went up by nearly 2C - and nobody said that was carbon dioxide."

The BBC kindly links the relevant temperature data, reproduced below: 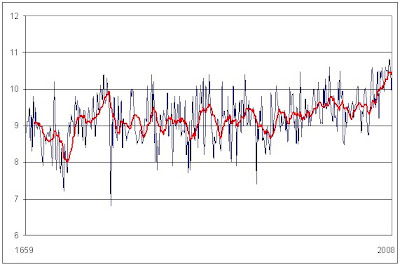 Note the beautiful cherry picking of data. 1699 must be just about the bottom of the lowest trough, and 1729 round about the peak of the subsequent increase.
These guys just can't seem to help themselves ...
at February 07, 2012 No comments: