Must be why Donald Trump hasn't been bragging about his job approval numbers. 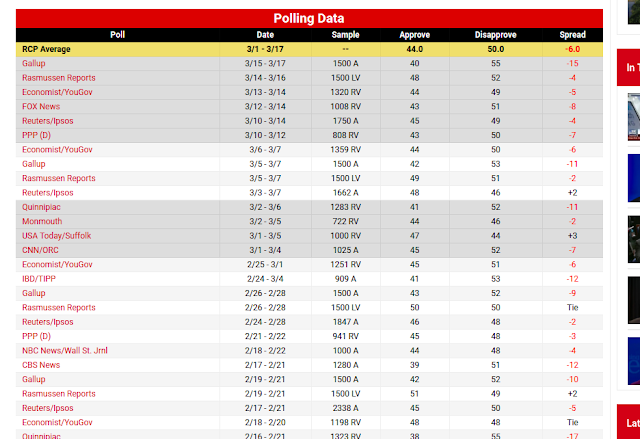 Canadian nurses working at Michigan hospitals were shocked last week when border security officers stopped them from entering the U.S. because of changes to their working visas under new immigration policies.

Last week, a new Canadian hire at Henry Ford tried to go to work, but was turned away at the Windsor-Detroit border. She was told advanced practice nurses and nurse anesthetists no longer qualify for the working visas because of policy changes under U.S. President Donald Trump.

"We really question the motives," said immigration lawyer Marc Topoleski, whose firm is retained by the hospital. "All of the immigration executive orders and all the things being rolled out have been focused on national security first, and this is clearly not an issue of national security whatsoever."

I mean, nurses, terrorists, they're basically the same. Where ever you get nurses or terrorists, you get injured and dying Americans. Think on!
at March 17, 2017 No comments:

I'd normally ignore everything to do with Katie Hopkins, on the principle of not feeding trolls, but this is a special occasion; she has just been found guilty of defaming and damaging Jack Munroe's reputation.

Horrible bully gets her comeuppance.

Wonder if the Mail will mention this detback for their star columnist?
at March 11, 2017 No comments: