So, I saw this on the interweb this morning: 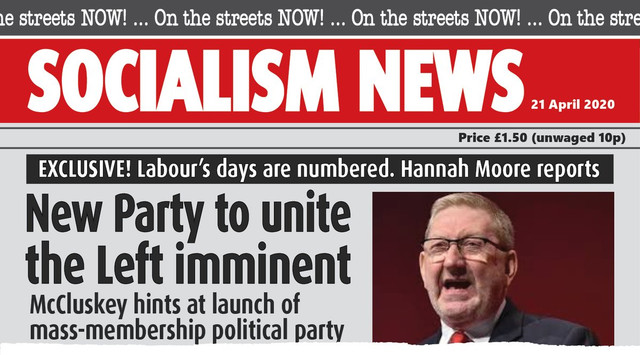 Now, it looks like a big ol' fake - probably a bit of Guidoesque mischief making, but it strikes a chord and a lot of people on the left are probably thinking of splits or mass purges and so on.

Everyone knows splitting the left vote is idiocy. Usually it comes from the centrist part of the bloc, who imagine there are lots of people who are just desperate to vote for 'moderates' and 'sensible policies' in the middle ground. There aren't.

But nor are there stacks of votes to be won on the left. So the idea of setting up a new left wing party is delusional. If it was centrists splitting off, it would be called as at best naively and at worst deliberately trying to help the Tories (as happened with TiG/Change). And it would be true and correct to call it that. The same applies to the left. As long as there is FPTP there has to be an accommodation.

The current problem isn't permanent. It is the result I think of people who came into the party in the 90s, or who attained power in the Blair era genuinely coming to believe the had found the Holy Grail and they could keep the Tories out of power forever, as long as everyone listened to them. Remember Bill Clinton used to talk about 'The Project' of gradually reforming society in increments?

The Blairite 'Third Way' would lead eventually to socialist nirvana, so incrementally slowly no-one would notice and everyone would be happy. Blairites had the same vision and it was a genuine belief. It wasn't necessarily a false belief or a delusion. We talk about Corbyn shifting the Overton Window to the left in four years - the Blairites thought they could do the same, gradually.

It was essentially a dispute about strategy, not the ultimate goal. Everyone wanted a fairer, more just society. For the record, I think the Blairites were incorrect in 1997 - they did not need to make as many compromises as they did and could have been more radical. But I can understand why they felt the need t compromise - I can remember 1992, my first election, and the sense of growing shock as the result came in and people realised we'd somehow managed to lose to John Major.

The idea that perhaps the same thing might happen influenced Labour a lot in the 90s, prompting the party to make more compromises to ensure they didn't lose the whole game.

Over time, the Blairite belief in gradualism became a fixed idea and a mania - just like a lot of people on this thread are talking about traitors and saboteurs, they viewed their internal opponents on the left as deliberately trying to wreck their glorious Project. Everything could be sacrificed to The Project - the reasoning went, "Yeah, Iraq was a terrible blunder, but was it worth throwing everything we've done and everything we can still do away over?" In other words, support us or let the Tories back in.

People whose thinking has been over-awed by the worship of this sort of gradualism have too much influence within the party - that's been shown in the report and the history of the last four years. But that does not make centrism itself the enemy. If there is going to be a civil war, and it results in the Labour Party hacking itself to pieces, all that will be left is a lot of limbs strewn about on the floor.

The people who have failed in their office need to be investigated and sanctioned. I don't think anyone gloating about Labour losing an election has any place in the party, nor do people who have been diverting money to support their own candidates. If there is genuine evidence of racism and bullying, that needs to be dealt with, just as genuine examples of anti-Semitism have to be dealt with. But it isn't necessary - or remotely sane - to talk about splitting the movement.

To borrow a real quote from Len McLuskey, leftists shouldn't “risk dramatic damage to the interests of the British economy and working people just in order to scratch their factional itch.”

In other words, support each other or let the Tories back in.
at April 22, 2020 No comments:

I was, of course, completely right - the plot against Jeremy Corbyn

This is made clear in a massive internal report that has been leaked.

It's stunning, as it reveals not just the vindictive, self-destructive madness of the supposed 'centrists' and 'pragmatists' of the party, accustomed to being in charge and reacting with fury to the discovery that they were not.

This is how they responded to the 2017 exit poll:

It goes on an on, example after example.

They were ecstatic at the idea of Labour losing an election; they celebrated polls showing substantial Tory leads and fretted about ones that showed the gap narrowing. And when reality hit them in 2017 they were devastated:

"They are cheering and we are silent and grey faced. Opposite to what I had been working towards for the last couple of years!!"

The response of Tracey Allen to the 2017 exit poll. She's not a Tory and the people she identifies as cheering are pro-Corbyn members. She's identified in the report as 'executive assistant/office manager, general secretary’s office'.

So, what had she been 'working towards for the last couple of years'? The overwhelming defeat of the Labour Party?

I note she is now identified as an ex-Labour staffer.

Remember how we were told - repeatedly - that Corbyn and his supporters were professional protesters and campaigners and weren't really interested in winning elections? Turns out the people saying that were self describing. They weren't interested in winning; in fact, they wanted Labour to lose.

Further, the report seems to back up claims made by Jon Lansman that the anti-Corbyn faction (that maintained control of the party apparatus until 2018) neglected to take any meaningful action over anti-Semitism: 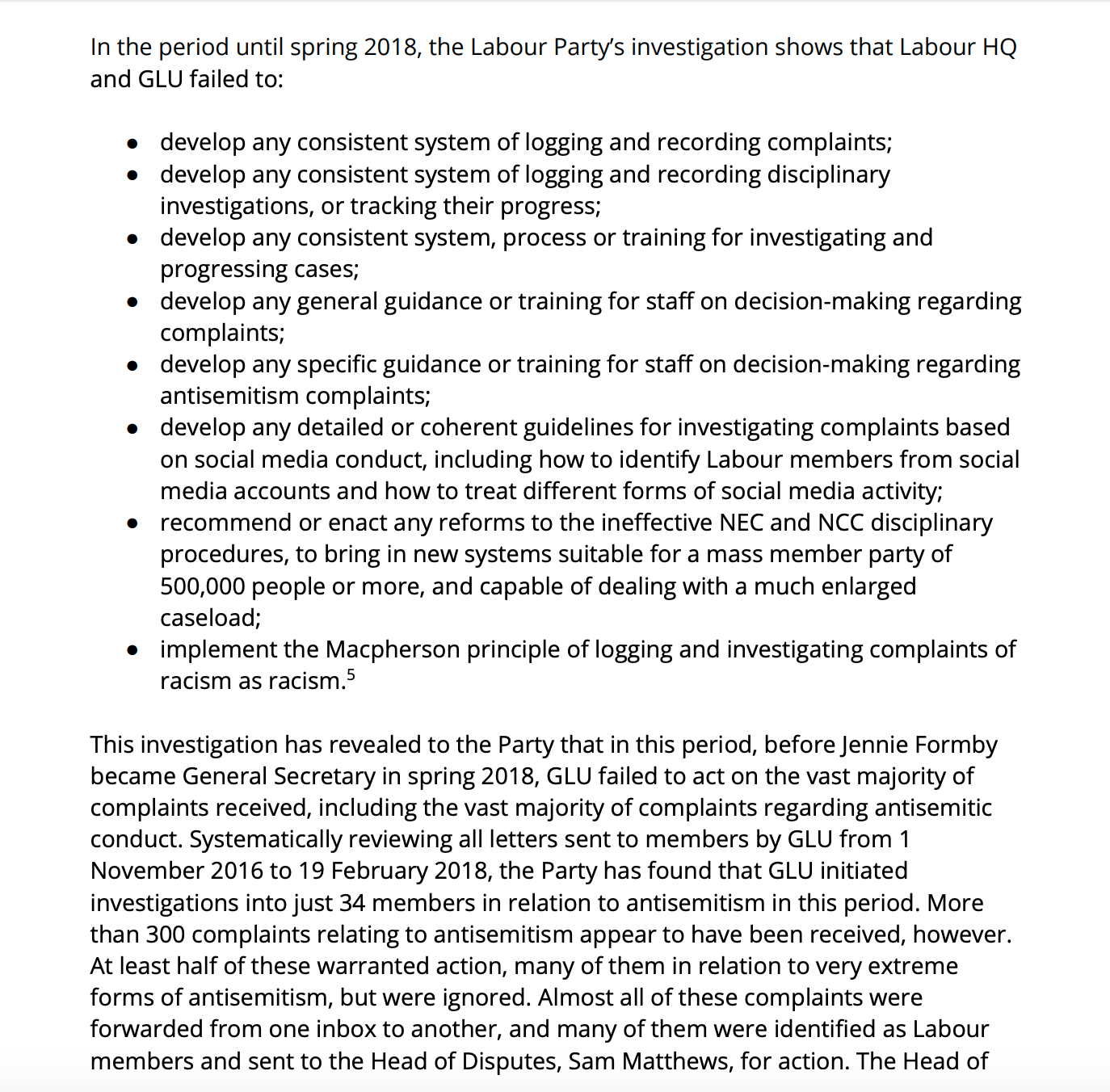 They did nothing to address what they were later to claim was an incredibly pressing and urgent issue; it's hard to escape the conclusion that this failure to act was wilful and their goal was to discredit the leader, in spite of the damage this would cause the Labour Party - in the hope of forcing Corbyn to resign, either before or after an electoral defeat.

After discovering that Corbyn wasn't the hapless mook they thought he was they concocted an active smear campaign against him, resulting in two years of constant smears and exaggerations about anti-Semitism before they finally got what they wanted.

Comfortably, in the very first round, with an impressive 56% of the votes.

I wonder, did members of the Shadow Cabinet start tweeting their resignations during Starmer's victory speech, or is that only a trick the right pull?

It is odd how all the talk of how the next leader "needs to be a woman" and how the party is "too Londoncentric" and too "elitist" we've just elected a male lawyer who was born in Southwark and represents a London constituency.  I won't even mention his hue - a whiter shade of pale - I don't expect miracles.  But I think he serves as something of a rebuke to the more radical / woke / open-minded (delete according to preference) part of the party.  You can be Labour and small-c conservative as well, and the preference of the party membership for older white blokes has been made abundantly clear, everytime we've been here.  How we respond to that, I'm not sure, but you can't just wish it away.

In spite of that carping, I think Starmer will be adequate.  I don't expect miracles from him, though if Covid 19 takes off proper, he might not need one.  The political and economic landscape in a couple of years time will be utterly, utterly different to just now.  History books will perhaps congratualte Corbyn on his strategic nous in passing on winning in 2019 - can you imagine what the press would be doing to a Labour government just now, trying to deal with Covid while still getting lost on their way to their ministerial offices and forgetting which side of the House they are meant to sit on?

It will be interesting to see how Starmer adjusts his position now he's got the prize - was all that somewhat leftish talk during the campaign just a tactic to stall RLB, and will he stomp right?  Or is there a genuine, if rather paternalistic, social conscience there?
at April 05, 2020 No comments: