Richard Littlejohn is a Dick

Usual despicable pish form the whine-iest man in Britain.  Read on, ye who are strong of stomach:


From across North London came reports of Romanians moving into homes while the owners were away.

['Reports', eh? No hard data, then? Just some anecdotes. How many 'reports' and how many of them were checked out? Hmmmm?]

In almost all of these cases, the squatters waved a ‘tenancy agreement’ that had allegedly been supplied by a broker.

[Almost all of an unspecified number might be 2 out of 3. In fact, since we're operating in a fact free environment, I proclaim it IS two out of three.]

The Government has now changed the law to make squatting a criminal, rather than a civil, offence.

And since the new law came into force last September, guess what? Nearly half of all the squatters prosecuted or cautioned are, that’s right, Romanian. They heavily outnumber home-grown squatters and those from other nations, including Algeria and Nepal.

[So, we're looking at a reduced time frame (only since September) and only those squatters prosecuted or cautioned. Not the ones who decided to move on or are still awaiting prosecution. So, in fact, 'nearly half' might be 'nearly half' of a minority of the squatter populatio. Probably, it is those three families mentioned a few moments before.]

And if Romanians make up half of all squatters, they also seem to comprise at least 50 per cent of all the beggars in central London these days. Presumably they return to their suburban squats of an evening.

[Ah, but they don't make up half of all squatters, do they? We've just looked at Wot You Woz Sayin' and that wasn't Wot You Woz Sayin'. It's what you want us to think you were saying, however.  You pathetically inept moronic hatemonger.]

Scotland Yard says that most of the cashpoint crime in the capital is down to Romanians, too.

[Fair enough. That seems to be plainly stated and attributed to a source that would likely be able to able to make the judgement.]

So, against this background, it’s worth putting into context Call Me Dave’s ‘tough on immigration’ speech yesterday, written in response to the imminent lifting of restrictions on Romanians and Bulgarians moving to Britain.

[So, against this background, your essay is a pile of disingenuous deceiving dog whistling hate promoting shit.]

Sorry, should have typed, 'worth less':


A youth payrate - of $11 an hour - has been reintroduced after legislation passed in Parliament tonight. The Minimum Wage (Starting-out Wage) Amendment Bill passed its third reading 61 votes to 60.

National, United Future and ACT were the only parties to vote in support of the legislation which will allow for a youth rate to be set at no less than 80 per cent of the minimum wage for 17-19-year-olds who are not supervising or training other workers. On current figures the rate would be $11 an hour.

So at least everyone under the age of 19 knows who to blame.


"First, they came for the scruffy, long haired teenagers with faces still blighted with acne. But I was was a middle-aged reactionary National voter, so I did nothing. Then I found my own wages weren't growing in line with inflation and I was screwed, and it was too late."

Bottom line, pay the work, not the worker.

Can expect a strong and decisive commitment from Labour to repeal?  Hello?  Anyone there?
at March 21, 2013 1 comment:


I remember watching that very performance on Top of the Pops. Can't believe it has been 18 years. Where did they go? What have I done? Hardly the sort of things to be thinking about on International Day of Happiness.
at March 20, 2013 No comments:

P.S. Bellamy, you are a bell end

Back in my naive, youthful days, I wrote some comments about David Bellamy - British naturalist turned Climate Change Denier turned incompetent typist - that implied that I thought he was a decent chap.  Inspite of his occasional forays into talking patent bullshit about climate change, I took pains to emphasis that I did not think Bellamy was a knob and a liar and a turd with a beard.  Instead, I emphasised he was


a splendid chap, a wonderful TV personality and, for years a great campaigner for the protection of the natural world ... I wouldn't count Bellamy as an evil lying bastard, he got it wrong and did the sensible, honourable thing, which is to admit as much and shut up.

One unintended consquence of the Daily Mail's latest incontinence-presented-as-journalism is to make me look a fool for being so generous. For who should we see, quoted in the Mail, but one David Bellamy, now holding forth about how he was a wronged man, a very wronged man, a man who was put to silence by the dread forces of Political Correctness and the IPCC.

No Dave, that was not true.  You opted to 'draw back from the debate on Global warming' because you were exposed as a blustering fool who couldn't type straight.

So, David, I'd just like to say I wish I had not said you were a decent man, capable of sense and honour.  You've made me look a bit foolish, and continued to add to the fug of confusion, deceit and disinformation that emanates from Climate Change Deniers.  Previously you were the sort of person one could laugh with and learn from; now you're a thoroughly nasty little man who sets no store by his word of honour.
at March 18, 2013 No comments:

Sorry, but it has to be said.  To Hell with Pandas.  They might be cute, they might be fluffy and they might be just like gigantic teddy bears, but they don't want to survive and we shouldn't waste limited resources trying to preserve an evolutionary dead end with a death wish.

This is a species where the females are only fertile for three days a year.  Three days! There are hardly any Pandas in the wild and the tiny colonies in zoos are living in conditions so alien to the species that they don't know how to fuck until shown footage of Pandas shagging.

Look, it's very nice that Ke Lin finally got his end away, but the fact that we have to show our captive curiosities footage of Panda sex so they can learn the basics is proof not of our ingenuity an an earnest of our eventual success, but an indication of how hopeless our task is. We can't hope to preserve anything that can meaningfully be described as a Panda.

Even if Youngyong succeeds in becoming a sort of ursine Kate Middleton and her bump is featured on the front page of every wildlife celebrity tittle-tattle magazine from here to the end of the world, whatever she produces won't be a panda, because a panda is as social as well as biological construct - and the pathetic, alienated remnants we are preserving are as far removed from genuine wild Pandas as I am from an Earthworm.

It would be more decent to let them die out, rather than preserving them as self-propelled, perambulating teddy bears to be gawped at in zoos and 'wildlife' sanctuaries.

I genuinely think there is no point in investing millions in trying to preserve something that seems intent on dying off and which has no chance of coping with out millions being continuously poured into preserving it's useless furry hide.

There isn't nearly enough money to go around and far more good could be achieved by directing money squandered on pandas toward helping preserve species that behave like they actually want to be here. Their only future is as a pitiful curiosity item in zoos.

Given how limited resources are, there are more useful areas the money could be spent. I'm not celebrating their extinction, just pointing out that it is going to happen fairly soon, and we would be better off not trying to avert it.
at March 18, 2013 No comments:

So, the Daily Mail has gotten itself all excited because it has, in its hot little rightwing compulsively dishonest and hypocritical hands a pretty little graph which it claims PROVES Climate change = Bullshit and the entire science community are dirty liars who lie and have been trying to savaGELY TRICK us into selling all our cars and replacing them with bicycles made out of mung beans, or something like that.

The source of this information is a secretive clique of fearless sceptics who boldly challenge the myths and lies spread about Global Warming.  They call themselves the IPCC.

Right, so I'm smelling a rat.

Here is the Mail story.  And here is the pretty little graph that they claim proves that we've actually been living inside a gigantic ice-cube all this time, and would have frozen to death a long time ago if it hadn't been for all that hot air emitted by the IPCC.

(Have you - like me - just realised that IPCC includes the letters P and C - as in Political Correctness?  Think on, brothers!)

Sorry, I promised you that graph: 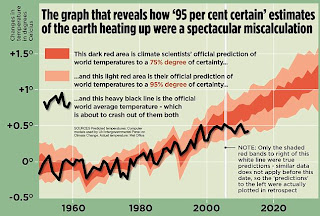 First of all, the wording of the graph is disingenuous.  It claims the '95% certain estimates of the Earth heating up' were wrong.  Well, not really.  Phrased like that, you might be forgiven for thinking the graph was revealing that the Earth has not been heating at all.  Which is, of course, complete bullshit. But the Mail gleefully grabs great handfuls of the bullshit and smears it all over its body, claiming in the first line of the accompanying story (as in fiction): "No, the world ISN'T getting warmer (as you may have noticed). Now we reveal the official data that's making scientists suddenly change their minds about climate doom."

The Earth certainly has been heating up, this is not in serious dispute, and the graph reproduced here has nothing to do with that. The claim that the graph discredits the "95% certain claims of the Earth heating up" is bollocks. The IPCC never made that claim. The previous report stated there was of 90% certainty of human activity causing observed change; but the graph illustrates statistical certainty about the amount of warming predicted by models. Nothing to do with causation, and even less to do with whether or not there has been heating. There has been. That's why the little black line is wiggling upwards.

What the graph does show is the spread of model estimates of how much temperature increase we can anticipate over time, as CO2 concentrations continue to rise. Estimates are based on how sensitive climate is to CO2 forcing - how big an increase we can expect if we double the amount of CO2 out there. This is not a known factor, so scientists estimate within the reasonable band - usually between 2c and 4c. The difference between the predictions and actuality suggests that maybe the correct estimate is at the lower end of the range, which is a conclusion reached by many climate scientists some time ago.

Claims in the article that the graph shows "a world stubbornly refusing to warm" is horseshit. Any fool can see the line wiggling upwards. The only question is the rate of wiggle.

And of course, for all the fulminations of the Mail, the actual data is following the lower border of the 95% certainty bracket rather nicely. Correspondence between models and reality is usually taken as bearing out the climate models, not discrediting them.

Only in the loopy universe of the Daily Mail is being right somehow being wrong.
at March 18, 2013 No comments: