Another lesson in truth from the Mail

A story from yesterday's edition of the Daily Mail:

Lessons about gays will be compulsory from age of 11

Pupils as young as 11 will be taught about homosexuality and civil partnerships in compulsory sex education classes.

All secondary schools - including faith schools - will have to teach children about same-sex relationships as well as traditional families.

Previously, heads could decide to opt out of teaching the controversial subject. (1)

Contained within the article is a little table, below, which gives the actual details of the new curriculum: 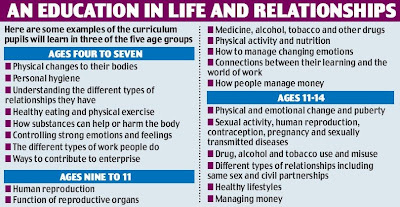 You'll notice that the section on "Different types of relationships including same sex and civil partnerships," falls in the 11-14 bracket. So the headline "Lessons about gays will be compulsory from age 11," is immediately misleading. They won't be.

Further down there is a quote from a representative of a Christian values lobby group, which encapsulates every thing I dislike about politicised religionous groups:

Simon Calvert, of the Christian Institute, said that 'pressing the virtues of homosexuality' could lead to more experimentation, which could be 'harmful' to children. (2)

Though in fairness, he might not have been talking about the specifics of the new curiculum, and have been a victim of a misrepresentation by the Mail - as that is what the Mail does, without scruple.