Is George Osborne actually doing all these really stupid photos for a bet?  Whoever is planning his photo-ops needs to be shot.  Even I'm starting to feel sorry for him. 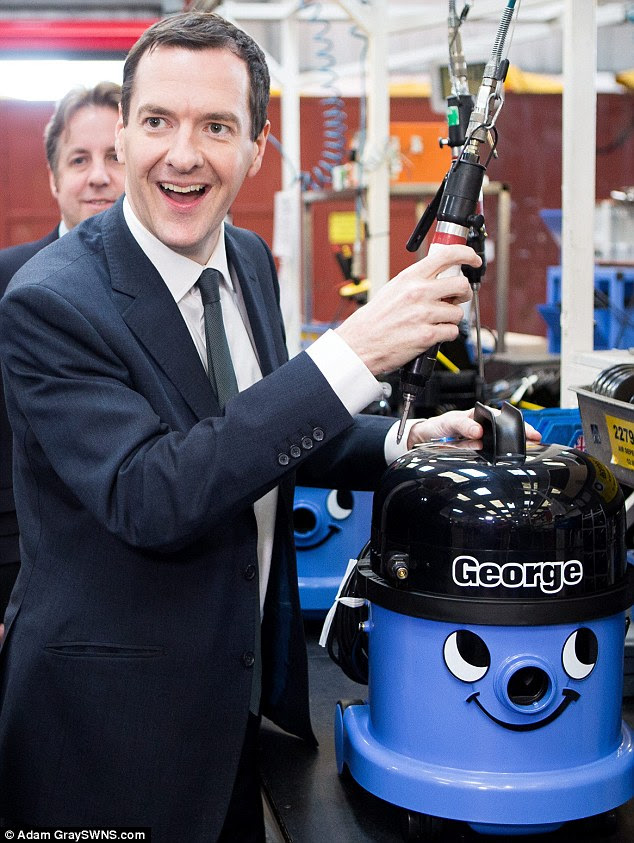 Is he not aware what century this is, and that the proles are not so impressed with gurning clowns patronising them for a few weeks every four or five years?

Is he actually trying to lose the election?  Is he a leftwing sleeper agent who has infiltrated the uppper echelons of the Tory party to undermine them at this crucial moment in history?

Or is the Conservative campaign so utterly clueless that they think this is a wise strategy?  One has to wonder, as thus far it has consisted of one old duffer ripping into Miliband, like your embarrassing uncle after he hits the sherry at lunchtime (affording Miliband the priceless opportunity to sound gracious in the face of this tirade), a stupid, measly bribe to rail commuters and the staggering news that Ed Miliband had a few girlfriends when he was younger.

(I'm still baffled at the colossal uselessness of that Mail revelation.  On what planet did it seem like the right time to lob that outstandingly dud grenade?  Who on Earth calculated that making Miliband seem like something more than a pathetic political wonk with no social skills at all was a strategic masterstroke?)

A few months ago, there was talk of Labour's 35% strategy - the idea they could attain power on just 35% of the vote, given how grievously the right bloc was divided and the way that Labour's vote was concentrated in urban seat that required fewer votes to win.

At the time, it was ridiculed as an admission of failure, a calculated exercise in political cynicism. Now  it looks like we're in a situation where the two big parties get 65% of votes, and there are parties that will be under-represented (UKIP, likely to get 15% of vote but only a couple of seats) and over-represented (SNP, likely to win about 80% of seats on less than 50% of the vote); and 35% seems like a veritable electoral Everest, for either party - and I'm thinking more the Mallory-Irvine, rather than the Hillary-Norgay.  The way the polls are lying at the moment, 35% would be a massive improvement for either party.

(Which raises all sorts of inevitable questions about the retention of First Past The Post.  Will the parties - spooked by two hanged parliaments in a row - actually acknowledge The System Is Broken and reform it?  Or will they seek to protect their privilege even more, as it is suddenly so threatened?  That was easy to do in the good Old Days when only the SDP-Liberal / Lib Dem vote was wasted.  Even the Libs sort of enjoyed the sense of being politely martyred by FPTP.)

Whoever can win over a couple of percentage points, and have at least one friendly party in parliament, will win. And maybe Osborne looking like a dick will encourage people to vote Tory, or maybe vote Labour. Or not vote at all. I don't know.

But enough is enough.  Not of the silly pictures of George Osborne.  As long as he's happy to make himself look like a fool, I'm happy enough to put them up here.  Payback for the hundreds of time Gordon Brown and Ed Miliband have been mocked for their appearance.  But enough of the antiquated electoral system that is corroding democracy.
at April 11, 2015