British election - the week that was

Another bad week for the Tories, with Cameron's massive tactical error in refusing to attend the debate making him look arrogant and cowardly at the same time - a remarkable achievement.

Miliband managed to look like the only real politician on the stage - another remarkable achievement, for him - and Sturgeon over-played her appeal to him, sounding suspiciously like a beggar on the streets of Edinburgh, desperate for change.

(Take a moment to appreciate the cunning play on 'change' - I'm quite proud of that!).

All she needed was some copies of the Big Issue to flog, a wee dog on a piece of string, and a bottle of Whyte & MacKay not very well concealed in her pocket, and she'd have been there. there, I tell you.

Meanwhile, the only possible good news the Conservatives could have exploited - marginally improved employment figures and a good school report from the IMF (which should set alarm bells ringing everywhere) - was pretty much brushed aside.  It didn't register because a) everyone was focused on the 'contenders' challenge' and, b) the Tories had squandered their reputation for economic competence the week before, when they basically promised everyone in the UK would be able to afford TWO golden speedboats, to wave a magic wand at the nasty deficit to make it disappear, and give all the money in the universe to the NHS.

(These may not be the actual policies proposed.)

(Actually, that's a better policy schedule than they came up with - at least it indicates HOW the deficit will be reduced, and relying on magic isn't inherently sillier than relying on 'supply side' voodoo economics.)

Meanwhile, the Daily Mail continues its heroic anti-Miliband campaign, slapping this not-at-all-over-the-top headline across the top of its website:


'You're not strong enough': Debate nightmare for Miliband as Sturgeon insists he cannot get to No.10 without her help - while Farage is forced onto the defensive for 'demonising' immigrants

Not at al biased there, the Mail.

It is intriguing that the rightwing media are still running so virulently anti-Miliband.  Is there a panicked sense on the right that too many of the sort of people who read the Mail and the Sun are toying with the idea of voting Labour?

Also, note the swipe at Farage and the UKIP - the pro-Tory press seem to have realised that they did too good a job of drumming up interest in the UKIP over the last five years, and now it risks fatally wounding the Tories.  Realistically, the Conservatives are unlikely to win any support from Labour at this stage - the 34% voting Labour have proven their unshakeable loyalty to MIliband over the last five years and are now savouring the possibility that they were right to stick with him - and Cameron's only route back is to squash the UKIP vote.

I don't think that will work, because if your stomach is strong enough to let you contemplate voting for Farage, you'll be difficult to sway.  Unless the press have some footage of him actually eating a child, or (worse) running an illegal immigration ring, the people voting UKIP will probably stay with them.  Though it might only take a few desertions to have a big impact.

And the Sun focuses on the issues that realy matter: 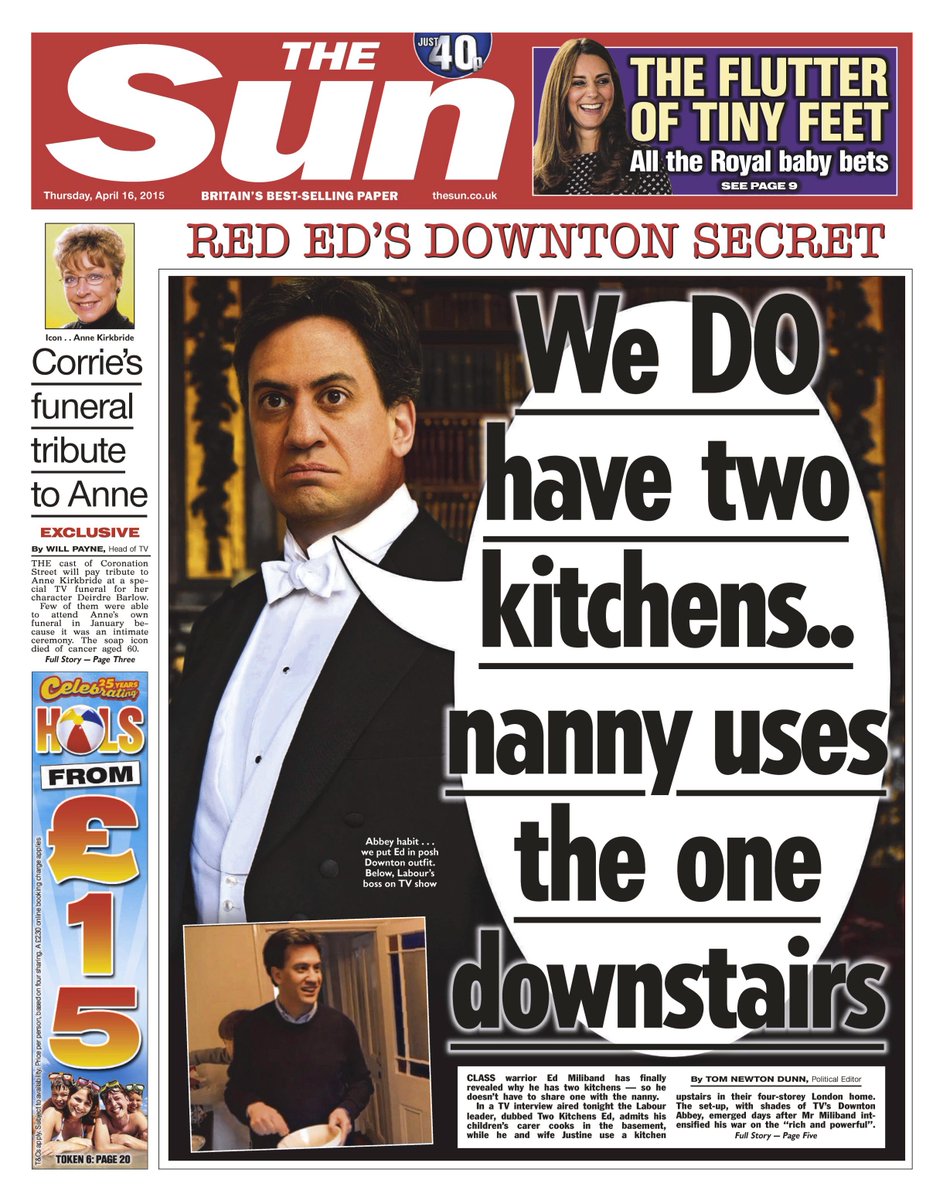 In spite of the right wing snipping, Ed Miliband's personal ratings have improved significantly - people really do seem to like the Happy Warrior.  And people don't actually care if he has two kitchens.  Most of us would quite like two kitchens and a nanny, if only we could afford it.  So Ed's 'hypocrisy' doesn't turn people off.  The difference between Miliband and Cameron is that Miliband comes across as humble and human, in spite of his privilege.  Whereas Cameron comes across as a bullying country squire, and a poltroon to boot.

So, another relatively uneventful week, overall, with the polls still quag-mired. It is interesting (very slightly) to speculate about how things might be shaping up if Labour hadn't suffered such a catastrophic reversal in Scotland.
at April 18, 2015