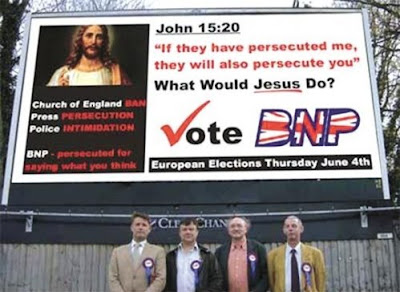 When I first saw this picture I thought it was a joke, but it is a genuine poster put up by the British National Party, a collection of Hitlerite goons with enough PR nous to make themselves seem semi-respectable (1).

The question is wrong. Instead of asking "what would Jesus do?" we need to ask, "what would the BNP do to Jesus"?

The answer is made clear in on their website:

... we call for an immediate halt to all further immigration, the immediate deportation of criminal and illegal immigrants, and the introduction of a system of voluntary resettlement whereby those immigrants who are legally here will be afforded the opportunity to return to their lands of ethnic origin assisted by a generous financial incentives both for individuals and for the countries in question.

We will abolish the ‘positive discrimination’ schemes that have made white Britons second-class citizens. We will also clamp down on the flood of ‘asylum seekers’, all of whom are either bogus or can find refuge much nearer their home countries. (2)

If Jesus had tried to emigrate to Britain (presummably to vote for the BNP), he'd have been refused as a shifty foreigner. If he had been living in Britain and the BNP had come to power (presumably with his support, the poster implies) they would have sought to 'resettle' him elsewhere, with 'generous financial incentives' (Thirty pieces of silver?). If Joseph and Mary, with the infant Jesus, had sought asylum in Britain, while Herod was butchering the innocents, the BNP would have told them to go to Hell.

So I don't think Jesus would have been voting BNP, really.

1 - If the BNP have a problem with me reproducing their poster and images, they can fuck off.
2 - "Immigration: time to say enough," policy statement of the BNP regards immigration. Policy details correct as of 19th of May, 2009. (http://bnp.org.uk/policies/immigration/)