This is an argument typically put forwards by deniers undermine the credibility of anthropogenic global warming. It is fair to say that any source making this claim can be dismissed as denier propoganda, rather than sceptical. The reason being that of all the claims made by so-called sceptics, this is the easiest to discredit. Anyone advancing the claim that the planet isn't warming has either failed to do even the minimum of research, or is deliberately trying to confuse and mislead.

Here are two examples, typical of how the claim is made:

In absolute pedantic terms, this is true. The high of 1998 has not been exceeded. It is also, however, irrelevant, as year-on-year temperatures are not critical - the overall trend is.

What the climate change deniers are doing is fixing on on data point - irrelevant in itself - and using it to draw our attention away from everything else that is going on which runs contrary to their claims. It's basically no different to looking out the window and deciding global warming can't be happening because it it is a bit colder today than it was yesterday. What is realy important in that example is how today and yesterday compared the same days in previous years and decades - the long term trend.

A more accurate picture is gained by looking at the five year rolling average temperature (3), which irons out the vagaries of individual years (which may have been unusually hot for all manner of reasons - there is more at work that human CO2 emmissions) and shows the real trend quite clearly: 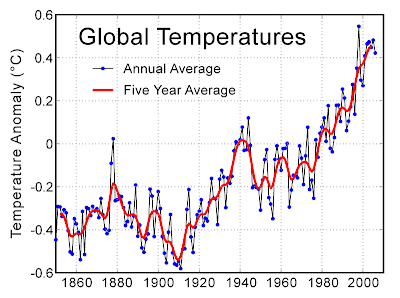 This is a more accurate picture of what the global temperature is actually doing. Of course there will be years that are hotter than others. Climate is a complicated thing, and there are many factors involved in it. In 1998, El Nino and the impact of anthropogenic climate change combined to give us a stunningly hot year. In 2008, La Nina may mitigate the impact of anthropogenic climate change somewhat, but that doesn't signal a reversal. It's just one more data point.

It's important to keep this in mind because the suggestino that the planet isn't actually warming suggests directly that the whole concept of anthropogenically caused global warming is a hoax. It is the logical inference. After all, if the planet isn't warming, there can't actually be global warming, can there? But this is only credible if you assume climate is only influenced by one factor - human activity. No sane person is suggesting this. Climate is complex, composite. There are natural climactic patterns and variations due to solar activity. There is also the impact of human activity, mainly through the release of CO2 and the depletion of natural carbon sinks. Over time, the effect of human activity becomes more significant in the composite picture. That is what we are seeing now.

The climatologists at Britain's Hadley Centre produced a ten year forecast in 2007, factoring in global weather patterns. They predicted a slight dip in global temperatures in 2008, but saw no reason to think that the overall upward trend would not continue:

However, the Hadley Centre researchers said that the influence of natural climatic variations were likely to dampen the effects of emissions from human activities between now and 2009.

It is unlikely the predicted a dip in temperature will be treated with proper scientific caution by the deniers. They'll shrill and squeal endlessly about it, claiming it proves the Earth isn't warming. They are wrong, and it is likely they know it, but it won't stop them. They aren't interested in truth, but in promoting their agenda.

If you want to talk about long term trends lets make that graph at least 2000 years, so we can track this from the Roman Warming to the present and see if anything is out of place.

I'm sure you are familiar with the 'Hockey Stick' graph which charts the temeprature over the last 1,000 years. It shows that yes, something is out of place.

(Unless you've got some proper scientific critique of it, rather than murmurings about source code, spare me the counter-claims about its validity.)

ANyway, stretching the temperature record back 1,000, or 2,000, or 20,000 years isn't really going to tell us anything very useful. We know that temperature has fluctauted historically. These fluctuations were not caused by anthropogenic activity because - as deniers are fond of pointing out - Romans didn't drive 4x4s. Previous variation can be attributed to other causes.

The logic of this cuts both ways, however. Historical variation was caused by non-anthropogenic causes. Generally, we know why temperature has varied, historically, and we can see the pattern. Current warming doesn't fit in with historical trends, so previous fluctuations don't have much bearing on what is happening in the 21st century. Unlike the ROmans, we do emit a lot of CO2, which is a green house gas.

We know what emitting CO2 into the atmosphere will do. IT will cause warming. We can estimate - roughly - what the historical CO2 emmissions are from the Industrial Revolution onwards. We know what effect that should have on the temperature. We see something similar happening, which can't be attributed to other causes, as there isn't a mechanism by which they can account for it.