I'm sure I'm not the only one who has noticed the irony of Boris Johnson's desperate attempts to cling onto power.
I recall, almost immediately after Jermey Corbyn was elected, a bunch of memes based on the WW2 film Downfall, associating the mild manner Jermey Corbyn with Hitler in his final, lunatic delusional days, desperately trying to summon up armies that did not exist to resist the unstoppable hordes. 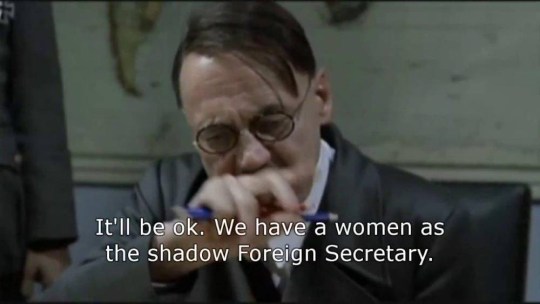 I am old enough to recall the aftermath of the 2010 election (after all I was blogging on a semi-regular basis then!) when people were gloating about how Gordon Brown would have to be dragged out of Downing Street, kicking and screaming, of course, in the end, Brown walked out of Downing Street having willingly pulled the plug on the Lib Dems attempts to try to wring concessions out of him he could not give.
(His successor, of course, rather made a mess of things by making concessions he did not imagine he would ever have to give, only to find events have a way of blowing things up in your face, which is how we ended up with Brexit.  And Boris Johnson.  Cheers, Call Me Dave!)
Johnson, of course is a huge fanboy for Churchill, so it is bemusing to see him casting himself in the Hitler role, as his premiership enters in berserk bunker phase.
at June 09, 2022