I've just had this lovely little graph (1) brought to my attention:

She's beautiful, isn't she? How could we have missed it all these years? How could so much money have been wasted on pursuing CO2 and pointing the finger at our harmless burning of coal and oil when, in fact, it was just a natural effect resulting from variations in the length of the sunspot cycle.
Well, because it is bullshit, of course.
It's actually old bullshit, finding its source in a 1991 paper, which contained some dubious methodology that was compounded with poor arithmetic when the authors tried to update their study. I'm not even going to bother with that bit, it has already been done by better minds than mine. And because I am also afflicted by poor arithmetic, I'm inclined to excuse Eigil Friis-Christensen and Knud Lassen. Isn't that what peer review is supposed to filter out?
Those who have continued to use their data, however, can not excused, especially those who persist in displaying the graph above. It's a sure sign you're confronted with a hard core denier, who is either too dim, or too dishonest, to see reason.
First of all, it should be clear the graph is fatally out of date. It runs up to the mid 90s, we're now in 2011. But there's a good reason why the deniers prefer the original version of the graph - because once more recent data is included (2) the suggestive correlation falls apart: 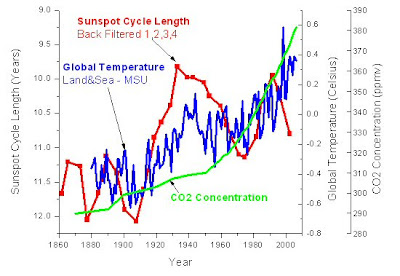 Note, blue carries on upwards, while red shoots downwards. Bang goes that lousy theory.
(Obviously, data has been treated slightly differently in the second graph. But no so much as to change the fact that there's a dramatic and fatal divergence in the mid 90s.)
But the problem is actually deeper than that. The correlation between the sunspot cycle and temperature is actually too good to be true. It excludes any other cliamte factors - most importantly, it leave no room for the impact of particulate emissions in the middle of the 20th century - the thirty years between 1940 and 1970 when temperatures were trending downwards.

Your solar fanatic might say we don't need them any more, but they were, none-the-less, a reality, something that happened that had a significant impact on global temperatures. After all, those lost decades have been brought up enough in attempts to attack the role of CO2 as a climate forcer.

But to preserve the correlation, you have to assume those emissions had NO EFFECT - whereas we know they do. Witness Pinatubo blasting off in 1991. So the sun spot cycle 'correlation' relies on excluding not one, but two massive climate influences - particulate emissions and increasing CO2 concentrations - that have affected global temperature over decades.

So, nonsense, really. When something looks too good to be true ...

1 - The graph originates in the work of Egil Friis-Christensen and Knud Lassen, originally published in "Length of the Solar Cycle: An Indicator of Solar Activity Closely Associated with Climate," in Science, issue 254, in 1991. I can not say who has since added the pretty colours and the CO2 levels to the original work. I found the version reproduced above here, "10 Questions for Climate Fascists," posted by Jack Lacton, on Kerplunk - Common sense from Down Under, 14th of March, 2007. (http://ker-plunk.blogspot.com/2007/03/kerplunk-list-of-climate-fascists.html)
2 - The updated version of the graph was borrowed from "Sun Activity Does Correlate with Temperature," unattributed work posted on Friends of Science, (http://members.shaw.ca/sch25/FOS/Climate_Change_Science.html#Sun_Activity). While I don't know the state of the arthmetic underpinning this version, given the generally sceptical slant of the website, I'm willing to run with it for now.