George Bush was in defiant mood yesterday for the final press conference of his little-mourned presidency, his face flushing red as he declared that only history would prove a fair judge of his leadership. 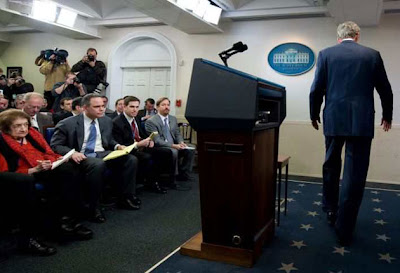 The banality of life after the Oval Office struck home as he described how he will soon be waking up, not to receive an intelligence briefing on terrorist threats six days a week, but to "make or fetch the coffee" for his wife, Laura. Mr Bush's final scheduled public event in office will be on Thursday, when he will deliver a televised farewell address.

I don't believe in kicking someone when they are down, unless they are truly heinous and evil on the scale of Robert Mugabe. George W. Bush, I suppose, did his best. He was totally unfit for the job, which he only got because of his family ties. I ssupose he genuinely believed he was doing the best, but it seems to me that almost every choice he made was the wrong one.

I'll wish him a happy retirement, though, and a long life, in the hope he'll find some time to read a couple of books.

1 - "Exit Bush, with a few digs at his critics – and himself," by Leonard Doyle, published in The Independent, 13th of January, 2008.(http://www.independent.co.uk/news/world/americas/exit-bush-with-a-few-digs-at-his-critics-ndash-and-himself-1332025.html). Image: AFP/Getty.