But then again, Opinium have always tended to show big Tory leads.  The 16% there isn't too outlandish for them.  Every single one of their last ten polls has given the Tories a double digit lead.  And 5 out of that 10 have given it as 15% or 16%. 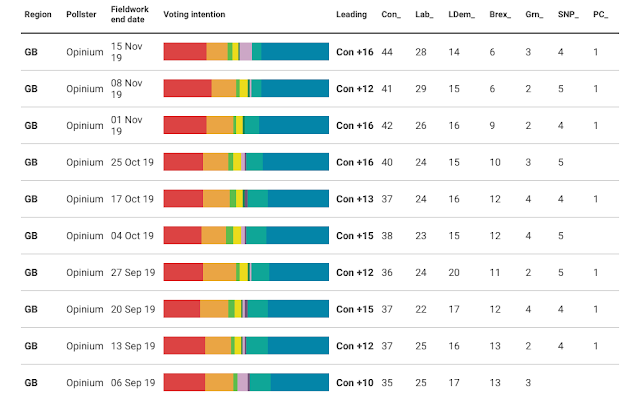 Another interesting (for me) feature of Opinium's polling is that they seem to have recently started including the nationalist parties in Scotland and Wales - and this seems to have coincided with the ballooning of the Conservative lead.

What could this mean?

1 - The Tories became wildly popular at that time and it is just a coincidence.

2 - Everyone in Scotland who supported SNP but didn't have the option said they'd vote Labour instead, and that was a lot of people; one they got the option of saying they'd vote SNP instead they did so, and Labour's vote collapsed.

3 - Opinium made some big methodological changes at the time and now their polling is completely bonkers.

Looking back at Opinium's polling pedigree, I find more reasons to be sceptical.  In 2017, their polls in the month leading up to the election gave leads of 15%, 13%, 10%, 6% and 7% - so they did detect a narrowing of the Conservative lead, but seem to have consistently underestimated how tight the race was.

Tory lead is clearly weaker now than at same point in 2017:

Having said that ... all Pollsters have changed their methodology since 2017 (possibly in a Labour-friendly direction in some cases ... though need more evidence to be sure) ... and some Pollsters do have Tories increasing their lead over last couple of weeks ... I suspect Labour will ultimately manage to narrow the lead but not to the same degree as last time (though that still leaves the crucial question of the actual accuracy / veracity of current polling).

Labour's task is to convince as many LDs as possible to vote strategically, while holding on to its Brexit supporters by emphasising NHS / anti-Austerity / social policy.