Bad Language, milk shaking, abuse of politicians and so on

So, there has been a lot of talk about 'inflammatory language' in the British parliament recently.

The whole culture of British politics has become very polarised and toxic.  Some recent examples:

Just met some lovely Tommy Robinson fans and I’d love for you to get to know them too pic.twitter.com/iRom8GavNy
— Owen Jones🌹 (@OwenJones84) 7 January 2019


Owen Jones would, of course, be physically assaulted by a group of thugs in August.

Take a moment to imagine someone yelling an insult at you every thirty minutes; or every fifteen minutes assuming they don't do it while you're asleep. Might tend to spoil your day a bit.


This is, of course, tip of the iceberg stuff.  I could go on and on.  There is no scraping of the bottom of the barrel of hatred here; the barrel just goes on and on.

And lurking in the background is the murder of Jo Cox in 2016, which came into the headlines again this week when her name was brought up in parliament by and MP (legitimately) commenting on the toxic environment surrounding Brexit.

There has been a lot of talk about inflammatory language, with Johnson lobbing terms like Surrender Bill' about; but the left needs to be careful here.  We have not always been as pure and spotless as we would like to think.

Remember when Nigel Farage was getting milkshakes thrown at him?  Oh, how we laughed.  Never mind that it was legally assault, and that crowing over his humiliation was legitimising bullying.  Saying Farage 'deserved it' because we don't like his ideas is dangerously close to legitimising the hate-filled abuse being directed towards the likes of Millar, Maugham, Jones and so on because - guess what? - people on the other side of the left / right or leave / remain feel as passionately as we do.  If it is okay for us to call Nigel Farage unpleasant things and throw things at him and intimidate him by waiting to ambush him then it is okay for the other side to do it as well.  Jeremy Corbyn was egged earlier on this year; people quite rightly condemned it.  A lot of the same people probably had a good chuckle at Farage being milkshaked.

And I'll admit I couldn't resist a smirk when I saw the images of Farage covered in milkshake and blustering feebly about people being mean to him.  But that does not alter the fact that assault is wrong. Even petty assault that doesn't cause physical hurt.

If you're saying it's okay to assault someone in the real world, you can hardly complain about mean words in a text message.  If physical assault doesn't count, then how can we justify being opposed to nasty pixels?  Pixels are even more ephemeral than flavoured milk.

People don't think twice about using foul and demeaning language to deride and insult a politician whose ideas they disapprove of; but when the same language gets directed at someone they support, it 'abusive.'  It's Orwellian double think.  People just don't seem to realise they are entertaining two contradictory notions in their heads at the same time.

This seems to be part of a bigger and ongoing project to debase political discourse to the point where everyone acts and speaks like Donald Trump; where argument is replaced by insult and reason by abuse, logic by threats.  It is driven most obviously (in Britain) by the likes of the Daily Mail ("Crush the Saboteurs!"), the Express and the Sun; but it is also advanced in the more measured tones of the Guardian, the Times and the Telegraph, with the persistent 'othering' and dehumanisation of the other side.  You can insult them, then tell lies about them, and assault them, because it is okay to do all these things because they are bad people.  Though the 'people' part is becoming questionable.  We don't like to think of them as people, but as "Remoaners" or "Gammons" or "Republicans" or "Fascists"; we're millimetres away from describing other people as 'vermin' fit to be exterminated.

And another uncomfortable truth.  The left / remain have to put their own house in order, urgently.  Sad to say, we are worse at it than the right.  A study by the University of Sheffield indicated that - contrary to the stereotypes - the most and the worst abuse aimed at MPs via twitter was directed at male MPs and towards Conservative / right-leaning / pro-Brexit figures.

Now, the study is by no means perfect.  It focused on just four months over four years.  Two of those months were immediately prior to elections (2015 and 2017); in 2015 both the Conservatives and Labour were lead by males, and in 2017 Labour was lead by a male and the Conservatives by a female.  With the focus on the leaders during an election campaign, that is bound to skew the statistics.  Cameron and Milliband are the most significant receivers of abuse in 2015. Johnson and Corbyn get a lot of abuse in 2017 but Theresa May gets almost as much. It's reasonable to think that if the party leaders receive most of the abuse, having mostly male party leaders would skew those stats.

(I'm not saying abusing party leaders is okay or acceptable; but I'd be interested to see data without those 'big beasts' in it to see how that affects the figures.)

Also, Boris Johnson received a lot of abusive tweets in 2017, as the figurehead of Brexit.  So those factors might tend to cloud the day-to-day abuse and threatening language aimed at less high profile and female MPs.  And here's the thing - Johnson's segment of the 'sunburst' charts is the largest and the darkest (size indicating amount, and colour indicating intensity, of insults). 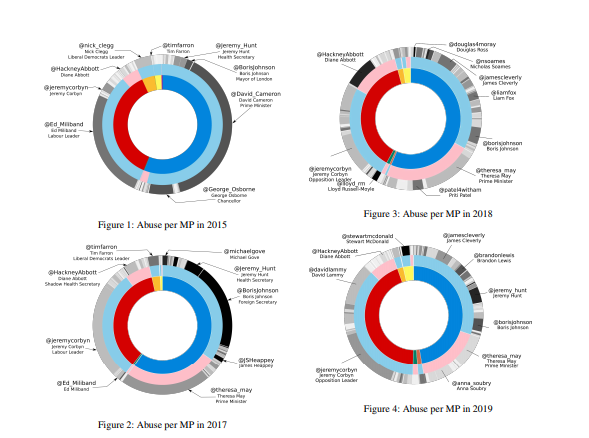 It looks like the left and / or Remainers are actually the more vituperative.  And that's very troubling.  We can not condemn the hateful, inflammatory speech of our opponents while engaging in - or at least ignoring - the virulent hatred emanating from our own side.

Thatcher claimed her greatest achievement was the neutering of socialism - Tony Balir and New Labour.  It looks like The Mail, Trump, Bannon, Farage et al have successfully managed to make the left into a nascent fascist movement.  They don't care that people oppose them; the important thing is that the people are adopting their language and tactics, which justifies and legitimises their own egregious behaviour and gives them scope to escalate it.  The more fascistic we sound, the more fascistic they can become; and they are much, much better at it than we are.  And even if we do win the odd scrap, ultimately they win the war, because we have become them.